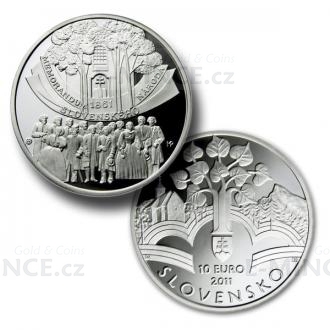 Memorandum of the Slovak Nation – 150th anniversary of adoption

On 6 and 7 June 1861, a political document titled “Memorandum of the Slovak Nation” was adopted by the Slovak National Assembly – a forum of representatives of Slovak towns and villages – at its meeting in Turčiansky Svätý Martin. The Memorandum laid down key requirements of the Slovaks for the recognition of their national identity within the multinational Habsburg Monarchy, in the constitutional, political, cultural and linguistic spheres. The main author of the Memorandum was Štefan Marko Daxner. The Assembly established a Permanent National Committee which, under the chairmanship of Ján Francisci, was set the task of turning the adopted resolutions into tangible achievements.

The Memorandum is among the most important documentary records of the Slovaks' progress towards national emancipation. Until the Austro-Hungarian Empire was dissolved in 1918, the principles of national identity and equality enshrined in the Memorandum underpinned Slovak policy on how to pursue this aim.

Obverse:
On the obverse side of the coin, a stylized lime tree superimposed on a tricolour in the form of triple mound is depicted in the upper part of the field. Above the left part of the tricolour, there is a church as a symbol of Christianity. Above the right part of the tricolour is an outline of Kriváň Mountain, a symbol of the freedom, protection and independence of the Slovak nation. The national emblem of the Slovak Republic is in the middle of the coin field. The denomination 10 EURO is centered in the lower part of the field, above the year date 2011. The country name SLOVENSKO is written above the lower edge of the coin. The stylized initials of the joint authors of the obverse design – Mgr. art. Andrea Rolková AR nad Pavel Károly PK – appear on the left and right edges of the bottom strip of the tricolour.

Reverse:
On the reverse side of the coin, participants at the Slovak National Assembly in Turčiansky Svätý Martin at which the Memorandum of the Slovak Nation was adopted are depicted in the lower part of the design. In the upper part there is the Lutheran church with lime trees, under the canopy of which the assembly took place. Set within the lower part of the façade is the Slovak symbol of a Patriarchal cross on triple mound. Below the façade is a tricolour design in which is written the year date 1861 and the text MEMORANDUM NÁRODA SLOVENSKÉHO. In the lower part of the field, the mintmark of the Kremnica Mint MK is shown at the left of the assembly and the stylized initials of author of the reverse design Mária Poldaufová MP are shown on the right.