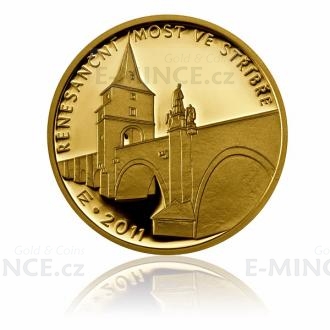 In the first half of 2011, the Czech National Bank started to issue a new cycle of gold coins, devoted to bridges in the Czech Republic. The second coin of this cycle will be issued on 11 October 2011. It depicts the 16th-century Renaissance bridge across the Mže River in Stříbro, which has a dominant bridge tower.

The design of the coin was selected in an unlimited anonymous competition, for which 21 designers submitted a total of 28 plaster models. The models were judged by the Commission for the Evaluation of Designs for Czech Banknotes and Coins, with Miroslav Nenutil, Mayor of Stříbro, as expert adviser. The design by Zbyněk Fojtů won the first prize and was recommended for realisation. Second prize was awarded to the design by Jiří Harcuba and third prize went to the design by Martin Dašek. The CNB Bank Board endorsed the Commission’s decision and approved the realisation of the coin designed by Zbyněk Fojtů, who thus repeated his victory in the competition for the previous Gothic bridge in Písek coin.

The Czech Mint has minted the coins from 999.9 purity gold in two quality versions (normal and proof) differing in surface treatment and edge marking. Proof-quality coins have a highly polished field, a matt relief and a plain edge, while normal quality coins have milled edges. The coin has a diameter of 28 mm, a weight of 15.55 g and a thickness of 1.9 mm.

Each coin comes with a red catalogue card containing a description and the relief of the coin. (source: ČNB, photo: Czech Mint).