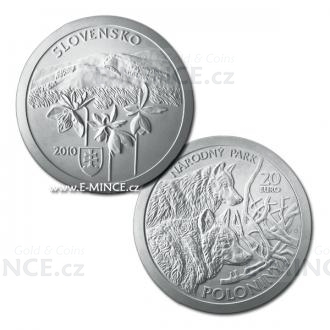 Poloniny National Park is located in eastern Slovakia on a point where the borders of three countries meet - Slovakia, Poland and Ukraine. It is named after mountain meadows on the main ridges of the Bukovské vrchy mountain range - called „poloniny". It was established on 1 October 1997. The National Park stretches over an area of 29 805 ha and a buffer zone of 10 973 ha.

Found here is the largest primeval forest complex in Slovakia. Up to 80% of the area is covered with natural forests, mainly beech and fir-beech forests. It is home to many rare species of plants and animals. Some endangered bird species nest here, such as the Red kite, the Peregrine falcon, the Short-toed Eagle and the Golden eagle. Poloniny is home to many beasts of prey, like the Brown bear, the Eurasian lynx, the Wildcat and the Grey wolf. It is the only territory in Slovakia in which the Wisent (the European bison) roams freely. Many interesting plant species found in the park belong to east-carpathian endemits - Great sperwot (ranunculus carpaticus), Purple hellebore, Campanula abietina, Dianthus barbatus compactus and others.

Obverse:
The upper half of the obverse depicts part of the characteristic landscape motif of Poloniny National Park with Purple hellebore underneath. The inscription near the upper rim of the coin reads SLOVENSKO, the name of the country. The lower part shows the national emblem of the Slovak Republic with the year 2010 to its left.