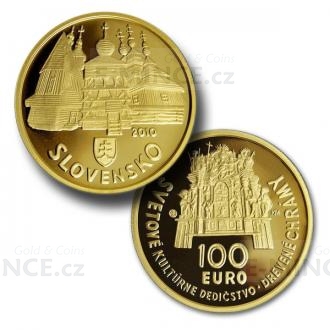 
In the year 2008 further cultural locality of the Slovak Republic - the Wooden Churches of the Slovak part of Carpathian Mountain Area was inscribed on the World Heritage List. The inscription includes eight churches built between the 16th and 18th centuries. They are ranked among the most valuable examples of the Slovak historical architecture, represent the unique symbiosis of Christianity and a vernacular architecture and illustrate the coexistence of three Christian faiths. The Roman Catholic churches are situated in Hervartov (Church of Saint Francis of Assisi) and Tvrdošín (All Saints Church), Greek Orthodox ones in Bodružal (Church of St Nicholas), Ladomirová (Church of St Michael the Archangel) and Ruská Bystrá (Church of St Nicholas the Bishop) and Protestant churches are in Kežmarok, Leštiny and Hronsek.

Folk builders used particularly familiarity with wood, its properties and potential in their construction. Predominantly log, less columnar frameworks are part of the churches common features. Their typological variations reflect differences in faiths, the impact of artistic trends during the period of their construction and the distinctiveness of regions. Interior decorations of great value have been preserved in the churches.

Obverse:
The obverse of the coin depicts three wooden churches which are included in the UNESCO World Hegitage list. The Church of St Francis of Assisi in Hervartov is shown on the left of the design, the belfry of the church in Hronsek is in the centre, and the Church of St Nicholas in Bodružal is on the right. Below them is the national emblem of the Slovak Republic, set above the name of the country, SLOVENSKO. The year 2010 appears to the right, below the depicted composition of churches.

Reverse:
On the reverse of the coin, the central motif is the Late Baroque altar of All Saints Church in Tvrdošín with the denomination – 100 EURO – appearing below it. In the lower part of the design is the inscription SVETOVÉ KULTÚRNE DEDIČSTVO • DREVENÉ CHRÁMY (World Cultural Heritage – wooden churches). The mint mark of the Kremnica Mint, MK, is positioned to the left of the altar, while the stylized initials KM, representing the first and last names of the coin’s designer, PhDr. Kliment Mitura, are on the right of the altar.