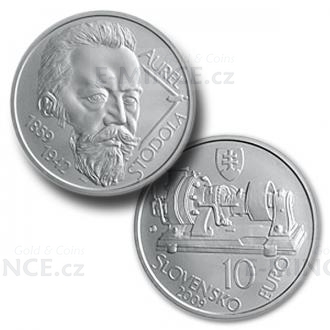 Aurel Stodola – the 150th Anniversary of the Birth

Aurel Stodola (10 May 1859 - 25 December 1942) – university professor, mathematician, physicist, constructor and inventor, is a world figure on the theory of automatic regulation and scientific foundations for the design and construction of steam and combustion turbines.
He is considered to be the father of the steam turbine. He became a recognized expert and gained a reputation as an excellent builder of machines, as a mathematician and as a physicist. From 1892, he was an associate professor, and later a professor, at the Swiss Polytechnical Institute in Zürich, where he chaired the Department of Construction Machinery. He worked at the school for nearly 40 years. In 1903 he published his fundamental work Die Dampfturbinen und die Aussichten der Wärmekraftmaschinen (Steam Turbines and the Prospects for Combustion Motors). The book appeared in six editions and was translated into a number of languages. He dealt with the theory of automatic regulation of machines and foresaw the age of automation. Many world scientific societies and universities awarded him the highest accolades and scientific ranks.

Obverse:
The obverse side of the coin depicts a turbo generator of that time, above which is the national emblem of the Slovak Republic. The name of the state, SLOVENSKO, is placed slanted in the lower left part of the coin, with the year 2009 beneath it. The nominal value of 10 EURO is shown beneath the turbo generator; the number 10 is placed horizontally, and the word EURO in a slanted line is to its right. The mintmark of the Kremnica Mint, MK between two dies, is on the left edge of the coin.

Reverse:
The reverse side shows a portrait of Aurel Stodola in the coin centre. To the right of the portrait is a pair of compasses of that time, used in technical drawings, with its arms spread open. The name and surname, AUREL STODOLA, are placed parallel to the compasses´ arms. On the lower left side of the coin, the years of his birth and death 1859 – 1942, appear in two slanted lines. The styled initials of the coin designer Miroslav Ronai MR are placed near the bottom edge of the coin.