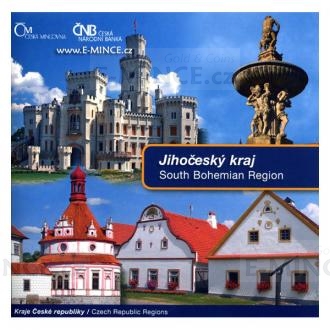 In cooperation with the Czech National Bank, the Czech Mint in 2009 launched a new series of standard circulation coin sets of the Czech Republic that feature one of the 13 Czech regions every year.

This complete set of circulation coins contains standard Czech coins that were not released into general circulation and did not become valid legal tender in a particular year. The coins at face values of CZK 1, 2, 5, 10, 20 and 50 are packaged in decorated carton cases, complete with an original token made of Nordic Gold (alloy CuAl5Zn5Sn1) and dedicated to two mint towns in the region.

The obverse side features the regional city’s landmarks with the circumscription in Czech “České Budějovice – mincovní město”. The reverse side

features the landmarks of Český Krumlov, which is listed among UNESCO World Heritage Sites and is the second most visited Czech city (Prague comes first), which is also a city hosting a mint. The coin’s token was designed by sculptor Vladimír Oppl.

The decorated and lacquered carton folder contains photographs and descriptions of the South Bohemian region landmarks.

The landscape of the South Bohemian region comprises the Budějovice and Třeboň valleys surrounded by mountain ranges and highlands. The region is also known as the “country of lakes” and for its carp production and is sought-after by fishermen and water sports enthusiasts who are attracted to the Lužnice, Nežárka and Vltava rivers and the Lipno lake. Along the region’s south-western border are the Šumava mountains with a variety of pristine nature parks. The region’s uniqueness is enhanced by rural architecture, in addition to a number of architectural gems, among them Český Krumlov and Holašovice, listed among UNESCO’s World Heritage Sites. Other attractive tourist destinations include Hluboká Chateau and the towns of Rožmberk and Jindřichův Hradec.