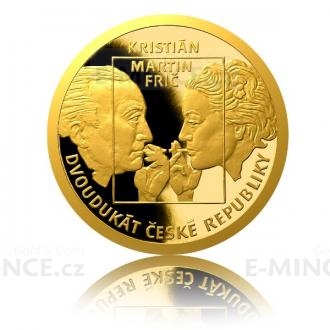 The motive of gold two-ducat of the Ducat series of the Czech Mint with the year 2017, which is dedicated to the interwar culture of the First Republic, is an immortal film of Martin Frič - Kristián.

"Film - as opposed to theatre and literature is a young field of the 20th century - championed in our country as much as elsewhere. The films made in Czechoslovakia satisfied the interest of the domestic market and in their best realizations increased its level. Over time, the Czechoslovak film has produced its own good actors and directors. Among these certainly belonged Martin "Mac" Frič, a versatile artist, who besides directing also played and wrote a screenplays. He is considered to be one of the founders of our film,"  says the academic sculptor Michal Vitanovský, the author of the artistic design of the ducat series and an expert in history. The most famous Frič’s film is without a doubt the social comedy Kristián. He made it in 1939, but its style is considered typical for the period of the First Republic. The Audience and the professional film critics have taken it with enthusiasm. No wonder - in tough times, people needed to laugh more than anything else, and thanks to the the story of a small travel agency clerk, who plays the pompous man of the world once a month and women who are subject to his irresistible charms, they could enjoy it to the fullest.

The obverse side of the two ducat presents a celuloid tape, capturing the exchange of looks of the sensual figures of Oldřich Nový and Adina Mandlová while lighting a cigarette. The inscriptions on the obverse state KRISTIÁN, MARTIN FRIČ and DVOUDUKÁT ČESKÉ REPUBLIKY. /The two-ducat of the Czech Republic/ The reverse side, that is common to all mintages of the Ducat series bears the symbols of film, literary, dramatic art and architectural complemented by the inscription ČESKÁ KULTURA PRVNÍ REPUBLIKY. /Czech culture of the First Republic/

The memory of the Golden Fund of Czech cinematography will get only 100 collectors.