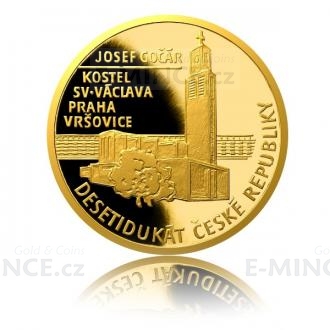 Gold 10 ducat, the biggest mintage of the Ducat series, whose theme became the art of the First Republic in 2017, is a church of St. Wenceslas by the architect Josef Gočár - a pearl of the interwar sacred architecture.

"The emergence of the Czechoslovak Republic was almost coincided with the end of the last historical style of Art Nouveau. Along with the young state were promoting the modern architectural trends. In two of them, cubism and functionalism, Josef Gočár presented himself and eventually became one of the most influential personalities of our architecture. During the period of the First Republic he implemented a number of important buildings. Also his urban concepts has determined the development of some of our cities in the decades ahead," says the author of this mintage and a leading medal maker, the academic sculptor Michal Vitanovský.

Gočár’s proposal for the Catholic church, that was built between 1929 and 1930, on the Svatopluk Čech Square in Prague-Vršovice was truly groundbreaking. The reinforced concrete structure composed in an unusual form of constructivist (Instead of the traditional historicist Gothic and Baroque style) is functionalist, yet full of emotion and witty use of irregular sloping terrain.

The obverse side of the 10 ducat is dominated by the view of the three-nave church with a prismatic tower and a stepped roof. It is complemented with an inscriptions JOSEF GOČÁR, KOSTEL SV. VÁCLAVA, PRAHA VRŠOVICE and DESETIDUKÁT ČESKÉ REPUBLIKY. /Church of St. Wenceslas in Prague Vršovice and 10 ducat of the Czech Republic/

The reverse side bears the year 2017, an inscription ČESKÁ KULTURA PRVNÍ REPUBLIKY /Czech culture of the First Republic/ and a symbolic expression of the four means of artistic expression - architecture, literature, film and drama.

10 ducat of the Czech Republic is issued on a run of only 100 pieces!