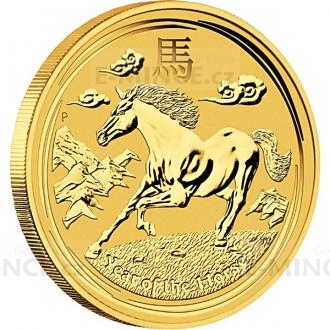 The Australian Lunar series of gold coins epitomises The Perth Mint's rich tradition of minting bullion coins portraying Chinese themes. The reverse design on this year's releases celebrates the 2014 Year of the Horse, one of 12 animals associated with the ancient Chinese lunar calendar.

The coins depict a horse galloping in a stylised mountain scene. The Chinese character for 'horse' and the inscription 'Year of the Horse' also appear in the design with The Perth Mint's traditional
‘P' mintmark.

A maximum of ten 10 kilo coins will be produced on a mint-to-order basis. Production will close at the end of 2014, when the coin's actual mintage will be declared.