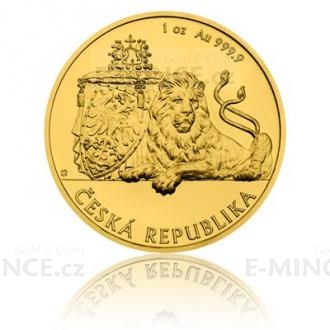 The "Czech Lions", a series of coins with a foreign licence, were issued by the Czech Mint in several different versions in 2017. Their offer expands gradually and the gold coin weighing one troy ounce belongs to the most popular variants.

"The Czech Lion" was acclaimed not only at home, but also abroad. It ranked with great success alongside famous international counterparts (Austrian philharmonics, American eagles, Chinese pandas,.), when requested by the largest internet distributor of precious metals. Satisfied investors from the Czech Republic, the United States of America, Canada, China, Korea, Germany or Hungary added this masterpiece to their portfolios. One troy ounce that weights 31,1034,768 grams is the world's most popular investment weight. The coins of the Czech Mint attract the attention by a sophisticated and engaging patriotic relief besides the investment potential and low number of issues.

The reverse side of the investment coin is dominated by the traditional czech symbols that are the two-tailed lion, the St. Wenceslas crown and the flaming St. Wenceslas eagle. The obverse side of the coin bears the linden branch and attributes of the island of Niue, which provides the Czech Mint with a foreign license to coin its own coins. The attributes are the name and the portrait of the Emperor Elizabeth II, the year of the issue 2019 and the nominal value of 50 DOLLARS (NZD). The original design of the coin was created by the leading artist Jaroslav Bejvl. Even before he managed to finish his work, he died at the age of 75, and so the expert medal maker Asamat Baltaev, DiS, continues processing this masterpiece.

The total schedule of issuance of ounce investment coins counts 1000 pieces - 900 pieces are stored in a protective capsule and another 100 pieces will be stored in a numbered collector´s packaging.